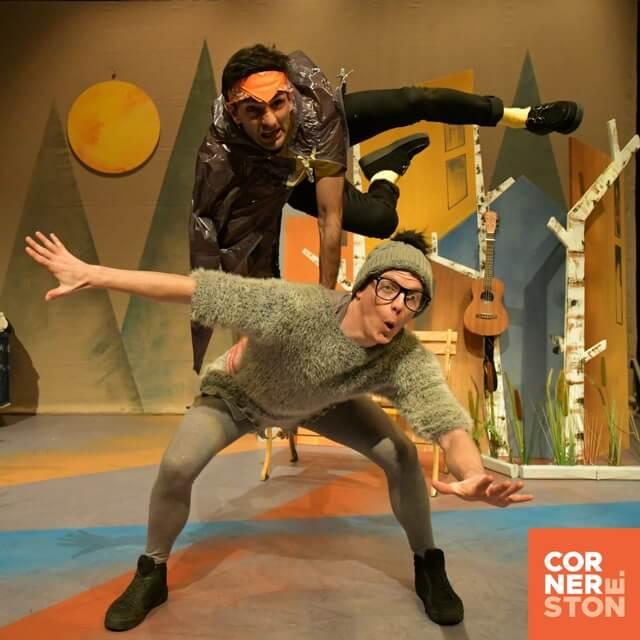 Q&A with the Playwright of Ugly Duckling Emma Reeves!

Feeling those January blues? Kid's not happy about being back at School? Why not treat the family to a trip out to your local Arts Centre to see the gorgeous family show Ugly Duckling, Cornestone's first show for 2018!

Ugly Duckling tours to Cornerstone on Sunday 14th January with two performances at 11:30am and 2:30pm.

Perfect for children aged 3 - 7 years and their families. Family ticket of 4: £24. CLICK HERE for more information and to book tickets.

We were lucky enough to have a Q&A with the PLaywright of Ugly Duckling Emma Reeves. Check it out below.

How did you get involved in writing Ugly Duckling?

Wendy Harris, the director, asked me. We’d previously worked together on Snow Child, and I was very excited at the thought of working for tutti frutti again, and on such a wonderful story.

Can you tell us about your version of the classic tale?

It’s a story about identity, being a fish (or duckling!) out of water, the pressure to conform and fit in and finding your own voice and self-confidence. Having worked for years on Tracy Beaker and The Dumping Ground for CBBC, I’m very aware of all the fostered, adopted and looked-after children in the audience, and I didn’t want the story to appear to be telling them that finding your biological family is some sort of magic solution to your problems. So, the emotional heart of the story is the relationship between Ugly and Mummy Duck (who’s basically his foster mother) and Ugly learning to trust his instincts and his true self, rather than trying to emulate others.

How challenging is it to write a new version of a classic children’s tale?

I think you can only ever tell the version of the story that makes sense to you. I don’t consciously approach the material thinking “how can I make it different to every other version of The Ugly Duckling that’s ever been made?” – I’d never finish the research, for a start! Ultimately, all you can do is think, what does this story mean to me and how can I tell it in a way that feels right and authentic?

If you have to sum up the play in 3 words what would they be?

How does Ugly Duckling stand out in a crowded children’s show market?

I used the word “authentic” before, and I think it applies to all tutti frutti’s work. It’s not about gimmicks, celebrities or even “big brands” from film and TV – it’s three incredibly talented actors, dancers and musicians working with a simple but clever set – I hope it inspires children to develop their imaginations and get excited about the potential of live theatre.

How did you start your career?

I was an actor, and the first play I wrote was an adaptation of the classic children’s book, Little Women. I wrote a few more stage adaptations including Jacqueline Wilson’s Hetty Feather, and also wrote for TV – I wrote episodes of the Hetty Feather TV series, The Story of Tracy Beaker, Young Dracula, The Dumping Ground and others, and was lead writer on Eve and The Worst Witch.

Who were and are your inspirations when it comes to writing?

I was inspired by all the books I read as a child. I read a lot of Doctor Who books and Russell T Davies, who revived the TV show for a modern audience, is a big hero of mine. But perhaps my biggest writing hero as a child was L M Montgomery, who wrote Anne of Green Gables. She also wrote a trilogy about Emily Byrd Starr, an aspiring writer, which, although it’s 100 years old now, I think is still one of the most inspirational and realistic books a young person could read about the business of becoming a writer.

What do you think are the biggest challenges of writing for children?

They’re the same as writing for adults - keeping stories and characters feeling fresh, meaningful and engaging. Giving people a reason to keep watching! Children are very honest and won’t necessarily be polite if you’re boring them, so you need to make sure that every moment is earning its place.

How important is theatre for young children?

I think it’s important. Getting the experience of seeing live performers is something that stays with you all your life. I still remember the shows I saw when I was young – seeing live actors encourages children to explore ideas through play and their own imaginations. Being in the same room and interacting with the performers is a vital experience.

Do you prefer writing for television or the stage?

They both have advantages and disadvantages. Theatre is much more immediate - you have a lot more contact with the actors and you can try things out on the spot to see if they work. You also get to experience audiences’ reactions, night after night. It’s very visceral and in the moment but when it’s gone, it’s gone. Which is part of the joy but also a bit heartbreaking - recordings of a theatre performance are never quite the same. TV exists forever and you also have the fun of writing lots of episodes for the same characters and seeing the actors develop their characters over many years and different stories.

How heavily are you involved in the rehearsal process for your shows?

Quite heavily – I always attend some days of rehearsals and am in constant contact with the team. For Hetty Feather, I was in rehearsals every day; for Snow Child I was in for part of the first and part of the last week. I’m always talking to the director about changes and challenges!

What have been the highlights of your career?

Being nominated for an Olivier for the Hetty Feather adaptation, and winning two Writers’ Guild awards – one for Eve and one for The Dumping Ground.  I was proud of the Dumping Ground episode in particular as it was a storyline about a refugee girl being sent back into a dangerous situation as they didn’t believe she was underage – it was an important topic and I was delighted that the episode was also nominated for a BAFTA.

What is the most important piece of advice you could give someone who is thinking of starting to write plays?

I know everyone says this, but it’s true. Read loads, listen and watch as much as you can. Try to get to the theatre as much as you can but if you can’t afford it, get books from the library, watch TV, listen to radio, watch stuff on the internet. Join a drama group if you can, acting really teaches you how a play works. And write as much as you can, all the time - writers are lucky in that it’s something you can do on your own and it’s free…

Why should audiences come and see the production?

It’s a lovingly made, imaginative piece of theatre by a brilliant company that will inspire children and feed their imaginations.

What's next for Emma Reeves?

Hetty Feather is being revived at Southampton this Christmas, and I’m working on some new shows for CBBC including a new adaptation of a classic book.