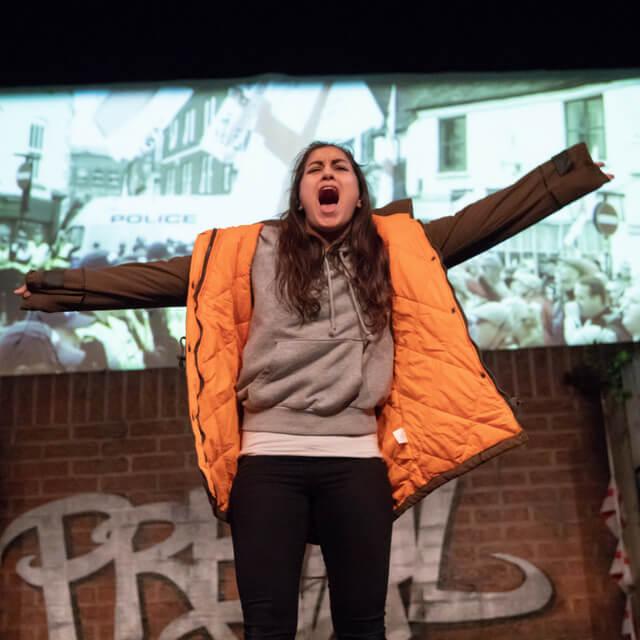 Castaways is an exciting new play from Oxfordshire company Mandala Theatre. It follows the story of three teenagers – born on the same day, in the same town but with very different backgrounds.

As part of their tour, Mandala Theatre are bringing Castaways to Cornerstone on Thursday 20th September.

Ahead of the show at Cornerstone, we caught up with Yasmin Sidhwa, Mandala's Artistic Director!

Q. You've worked with groups of young people to develop Castaways, using aspects of their experiences in the show. Tell us more.

Castaways is the second part of our trilogy which focuses on the theme of Place, Identity and Belonging.  We ran 28 Outreach workshop sessions with 227 young people (213 from BAME/white lower socio economic diverse backgrounds) between March and July 2017, using drama techniques, discussion and creative writing and looking at ideas around what makes young people connect or dis-connect to the communities they grow up in.

We focused on 4 towns or cities: Luton; Woolwich, London; Oxford; and Stockton-on-Tees so that we could see if there were similarities or differences in what the young people were saying. The diversity of the groups was also interesting, in Luton we ran workshops with schools with 90% Muslim young people and also schools with a diverse mix of young people. In Woolwich, we worked with a school where the young people were 98% from Black, Asian and Ethnic Minority backgrounds, while in Stockton the young people were predominantly white. Their input on what they were proud of in their town or city, whether they ever felt like an outsider and what provoked them to feel like this and their views on friendship groups, extremism and vulnerability all fed ideas into both the draft and the final script. A Rehearsed Reading of the draft script was taken back to the same four cities in September and November 2017 and the young people fed back on what they thought worked, what they would change and how the script affected them as individuals. Their feedback again helped Atiha [Atiha Sen Gupta, the playwright] and I to shape the storyline and see what needed developing or changing.

Q. How has the creative process been in general?

The creative process has been really satisfying on the whole. To have had the opportunity to work with so many young people, often for day-long workshops or over a series of workshops, and to get their input not only in the initial stages but also further along when a draft script was in place, means we feel that the work is authentic, appeals to a young audience and reflects and challenges the current situation in England and also in Europe, and is therefore very relevant. Also, working with young professional actors from Black, Asian and white lower socio-economic backgrounds in both the Rehearsed Reading and the tour, has brought another layer to the production. They bring their own experiences and views on belonging and connection or disconnection to the final play.

Q. What do you hope young participants in the show will take away from the experience of creating it?

The young actors in the show feel that they are expressing something very relevant and topical, that touches them. The amount of work we have done on their interpretation of the characters they are portraying has enabled them to create characters that are very rounded, to the point where audiences believe they are sharing their own personal stories on stage.

Q. And what do you hope audiences will take away from watching it?

We want Castaways to reach both mainstream audiences and audiences whose experience are contained within the play. We especially want audiences to feel that they are watching something that is relevant to them and their lives, and which provokes them to discuss the ideas with each other and with others who may have very different views to them. We want the audience to be moved by what happens to the characters in the play and to feel motivated to do or see things differently. We especially want the play to reach young people who may not go to the theatre normally and affect them by the power of live theatre and the stories on stage.

To find out more about the performance at Cornerstone and to book tickets, CLICK HERE.