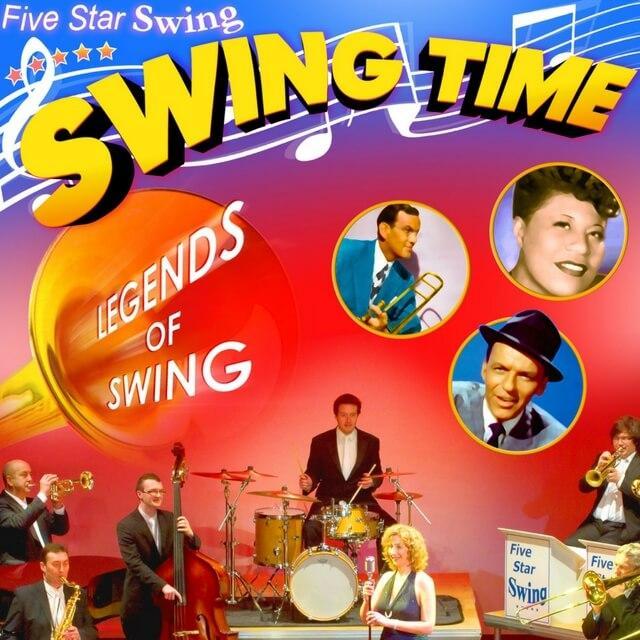 Meet the Swing Time band performing THIS Thursday at Cornerstone!

Didcot’s own double bass player Nigel Emerton is returning to the Cornerstone stage with Swing Time on Thursday 26th October!

Five Star Swing present Swing Time as part of their national Poppy Appeal tour. The show promises to be a great evening full of classic songs from Frank Sinatra, Ella Fitzgerald, Glenn Miller and many more.

Nigel is excited to be returning to Didcot… ‘Fans have enjoyed this ‘feel-good’ style of music for generations - following our extensive UK tour I’m excited to be bringing the sound of our big band brass, saxes, rhythm and vocalists back home!’

The show is led by bandleader Chris Smith, composer and arranger for the BBC Radio Big Band and a former composer for Herb Miller Big Band – (Glenn Miller’s brother). Chris’ father, Chris Smith (senior) played trombone for Frank Sinatra on many of the great singer’s European tours and in the 1960’s for Tom Jones and TV shows plus many of the famous Morecambe and Wise shows.

Nigel has, over the past 25 years, earnt his position as one of the premier double bass players in the country having played at the Royal Albert Hall on many occasions and touring the UK and Europe playing the great music of Count Basie and Duke Ellington. As well as Bob Monkhouse and Jimmy Tar buck, Nigel has performed with prestigious theatrical productions such as Jesus Christ Super Star, Sister Act, Avenue Q, Fame, God spell, and Hairspray.

Mike has performed and recorded with Shirley Bassey, Jools Holland, Gary Barlow, Elaine Page, Tony Bennett, Roy Castle, Harry Secombe and the Ronnie Scott’s Big Band. Mike was also the Musical Director for the English entry of “A Song for Europe” plus he recorded all the solo trombone music for the hit TV series – ‘Benidorm’!

Simone studied at the London Guildhall College of Music before Playing lead Alto Saxophone with the Ivy Benson Orchestra. She has also recorded with Paul Weller’s “Style Council”, an appearance on the TV film “Lace 2”, featured saxophonist on the Paul Merton Show, Russell Harty TV Show and the New Squadronaires. Musical tours have taken her to France, Italy, South Africa and Mauritius.

The band have previously performed on the BBC TV ‘Children in Need’ and Dame Vera Lynn’s Celebrity Charity Ball. They have also featured at London’s Leicester Square theatre with ‘Bugle Boy’ – the Glenn Miller story and though this were invited to perform for the original TV cast of Dad’s Army some years prior.

Bandleader Chris Smith believes swing music started to become more popular with the younger generation since Robbie William’s popular album ‘Swing While You’re Wining’ released back in 2001… ‘this great album, on which many of my musician friends performed, has done a wonderful job of increasing the awareness of the genre to a younger audience and we now find all age groups enjoying our concerts’.

For toe-tapping Swing, you won’t want to miss this fantastic band at Cornerstone THIS Thursday! Tickets: £15, conc £13.50 and members £12. CLICK HERE for tickets.