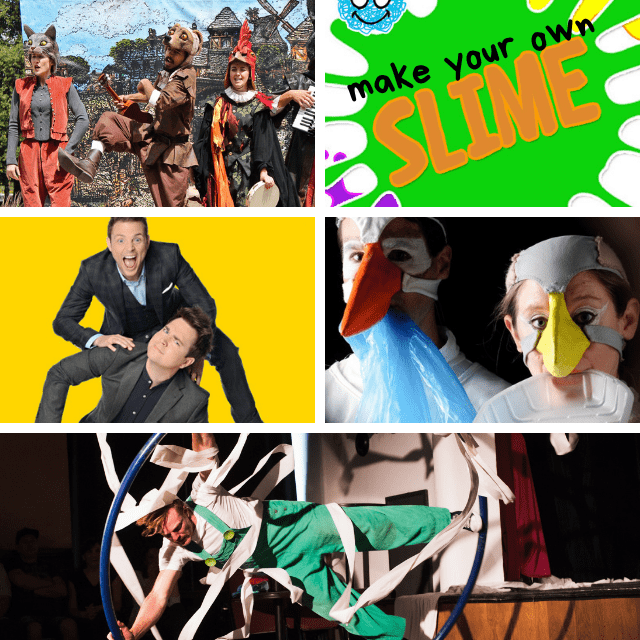 Half term treats coming to Cornerstone!

No sooner have the parents of Oxfordshire sent their children back to school and breathed a collective sigh of relief, than the May Half Term holiday is peaking its head around the corner. No need for panic! Cornerstone Arts Centre in Didcot has it all covered with events for the whole family from your little ones to your slime-crazed pre-teens.

Town Band of Bremen
Join us on Sat 1 June at 12pm & 2.30pm for a FREE outdoor theatre show by The Fabularium. The Town Band of Bremen will be performed in the town square outside Cornerstone following the classic German tale of four farm-yard friends! This fun and whimsical show features a donkey, dog, cat and cockerel working together to try and raise money by winning a music competition to get back to their beloved farm. It’s as wild as it sounds and will include some songs that you will not be able to get out of your head. Using mask work, puppetry and a medieval cart of all things – it’ll keep the entire family entertained and it gives adults a chance to pop into Nourish for a quick coffee too whilst the kids are entertained.

Chores
If you’re struggling to get the kids to do their chores, then we have the perfect show for you! We can guarantee that after seeing Chores they’ll be racing to get stuck into even the smallest of jobs around the house. Reigning from Australia, Chores starring Julian Roberts and Derek Llewellin, tells the familiar story of two brothers who don’t want to tidy their room using acrobatics, juggling, death-defying stunts and cheeky humour. Chores makes tidying the toys away into a comedy circus. Book for Sun 26 May at 2pm, tickets from £9.

The Bird Show
With frolics and foraging flitting, flying and two unusual feathery friends, this is a story of friendship, adventure and courage. The Bird Show uses everything from live music, bird puns and object puppetry to tell a spell-binding comedy about conservation, migration and imagination in a way that children will understand. The Bird Show is written by award-winning playwright Tiffany Woodsmith and directed by international physical comedy director Susana Alcantud with acclaimed theatre and opera designer Bronia Housman. The age guidance for this show is from 4yrs upwards so it’s suitable for the entire nest – you and your fledglings. Coming to us Thur 30 May at 2.30pm with prices starting from £6.50.

Sam & Mark’s on The Road Show
Children’s TV royalty Sam & Mark, the lovable duo from CBBC’s Big Friday Wind-Up and Copycats are jumping from your screens to Cornerstone for this half term! Join this BAFTA award-winning pair for an unmissable hour of games, jokes and sketches which will get the whole family laughing. Coming to us on Sun 2 Jun at 2.30pm with prices starting at £8. Be quick, this one is almost sold out!

Slime Workshop
If you’re a parent you’re probably familiar with the trend of making home-made slime that’s taking the world by storm – and even, unfortunately, your kitchen. This half term we’re taking the mess away from your home with our hour-long slime making workshop at Cornerstone. This gives a chance for the kids to let their creative juices flow whilst making some crazy colourful slime. And if that wasn’t enough of an incentive, this is a FREE drop in running from midday to 4pm on Saturday 25 May. Adults are welcome to grab a cuppa and a slice of something tasty whilst the children go wild in this fun, hands-on session. Please note that this workshop is not suitable for children under 3.