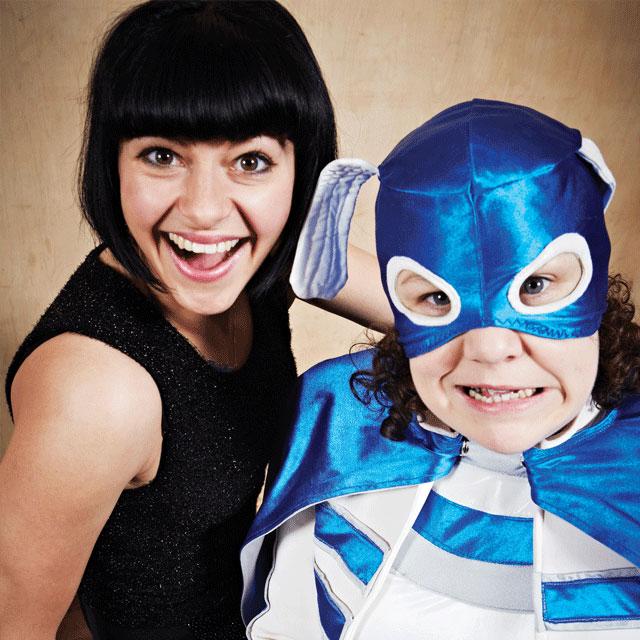 On the 19th March 2014, I did something that was both terrifying and thrilling; I registered a show for the 2014 Edinburgh Fringe Festival. At the time I had no idea of the incredible adventures that were to come. What I did know was that it felt important to share, at one of the busiest performing arts festivals in the world, my experiences of Tourettes, and of the difficulties I’d had accessing theatre.

At that point my goal was to make a show and get it to Edinburgh. Together with the incredible Jess Mabel Jones and Touretteshero co-founder Matthew Pountney, we created Backstage In Biscuit Land (BIBL). The show weaves comedy, storytelling and my involuntary tics; bringing to life the surreal world Tourettes creates around me.

Although March 2014 marked the start of my journey to the stage, its roots stretch back to an upsetting experience I’d had at a theatre several years earlier when, I was asked to sit in a sound booth because of the involuntary noises I was making. At the time I promised myself I’d never set foot in a theatre again, but it’s a promise I’m glad I didn’t keep. By taking to the stage, I’ve found the one seat in the house I won’t be asked to leave, and it’s given me the opportunity to share the message that making theatre inclusive makes it better.

With the support of Unlimited, Battersea Arts Centre (BAC), Graeae Theatre Company and our wonderful producer Jolie Booth, we opened in Edinburgh in August 2014. The response to the show was phenomenal and, critically, it did a lot to increase awareness of ‘Relaxed Performances’.

Relaxed performances offer a warm welcome to people who might find it difficult to follow the usual conventions of theatre etiquette. They take a laid-back approach to any noise or movement coming from the audience, and they give everyone the freedom to relax and respond naturally.  As a direct result of seeing BIBL many performers including Mark Thomas, Nina Conti and Daniel Kitson have gone on to hold relaxed performances.

This March marks a new milestone in our journey with the show as we hit the road and take Biscuit Land on tour. Supported by House we’ll be bringing heading to twenty venues across southern England. I’m particularly excited to be taking the show to lots of smaller venues, and sharing my journey from ‘sufferer’ to ‘superhero’ with new audiences. We’ll also be landing in Nottingham, the Albany Theatre in Deptford, the Machynlleth Comedy Festival and, with the help of BAC’s Collaborative Touring Network, at six theatre festivals across the UK.

Because all our shows are relaxed, if you’re one of the 300,000 people in the UK with Tourettes, or have any other condition that makes being still or keeping quiet difficult, or you have a baby with you, or just a very loud laugh, you’ll be very welcome.

If you’re a bit anxious about seeing the show, or would just like to know more about what to expect in advance, you can download our visual guide here. If you’re blind or visually impaired you might like to know we’ve written audio description into the script so you’ll know what’s happening on stage even if I don’t!

A few years ago the thought of setting foot inside a theatre filled me with dread. Now it fills me with excitement. I can’t wait to hit the road with Biscuit Land and I very much hope to see somewhere along the way.

As one reviewer eloquently put it: “You’ll definitely laugh, you may cry, you’ll probably get a biscuit.”

I’ll go one better and guarantee you one.