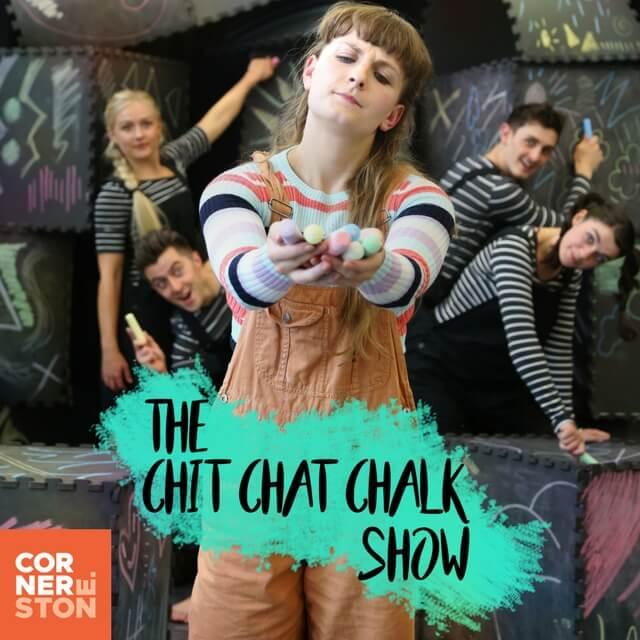 We are very excited to have The Chit Chat Chalk Show team at Cornerstone on Sunday 4th February.

The Chit Chat Chalk Show is an interactive family show for 3-8 years. The story dances, draws and giggles its way through from beginning to end on a magical chalky adventure.

Before bringing their show to Cornerstone, we caught up with the team!

Q) Where did the idea for the show come from?

We first became interested in creating this show in late 2016. The concept and ideas behind the show developed over many conversations (in lots of Manchester coffee shops!). The first thing we knew about the show was that it was called ‘The Chit Chat Chalk Show’ and that we wanted to make children feel empowered, everything else followed!

We were interested in fusing our skills as practitioners working across different art forms - both physical theatre and contemporary dance. We had been working with children and young people over the previous 5 years delivering creative learning activities, but we wanted to make a performance that was created for young people.

Q) What was your inspiration for the show?

Our education work with children had opened our eyes to the pressures that children now face in school and their social lives. We wanted to make a show that made them feel good, helping them develop the skills to cope with pressure!

Q) We understand you worked with Schools and young children to develop the show. What did you learn from your reserach?

We worked with arts centres across Greater Manchester and Lancashire to develop the show and regularly invited young children to be audience members to observe and participate within the work as it developed. We worked closely with Z-Arts, Waterside Arts, The Dukes Theatre and
Salford University as partners on the project and they assisted us in connecting with groups of children - they were the first people to experience the show, offer feedback and help us direct the future studio phases. We then embarked upon a schools tour across Cumbria where we visited 7 different education centres; primary schools, further education colleges and S.E.N groups. We explored the show through workshops, allowing the children to take part in exploring creative tasks and creating their own mini performances! The young people enabled us to see the strengths, weaknesses and challenges that we were going to face within the show. We learnt that every show was going to be very different each time... after all, each child is truly unique!

Q) What is it like working with a young audience?

We are having so much fun working closely with lots of excited little people! They bring an energy and vitality to each of us when we perform. It feels like a really special show when we see how much fun the children have had.

Q) Were there any particular skills/expertise you looked for when recruiting for this show?

The most important thing we look for when recruiting new Chit Chat Chalk cast members is someone who can fit into our small team! We have a really intensive touring period coming up and its so important to us that we all have a fun and enjoyable experience! On top of this, the new member of cast must be good at dancing, acting, drawing, interacting with children, multi-tasking, carrying props, cleaning chalky mats, long van journeys!

8) How long have you been developing this show?

From idea to tour, it has taken us about a year to bring The Chit Chat Chalk Show to the stage!

Q) What do you find most challenging about performing in this show?

It’s quite hot under the lights! The main challenge is keeping track of the 120 tiles that we move throughout the piece!

CLICK HERE for tickets and more info for The Chit Chat Chalk Show. The team will be performing twice on Sunday 4th February at 11:30am and 3pm.