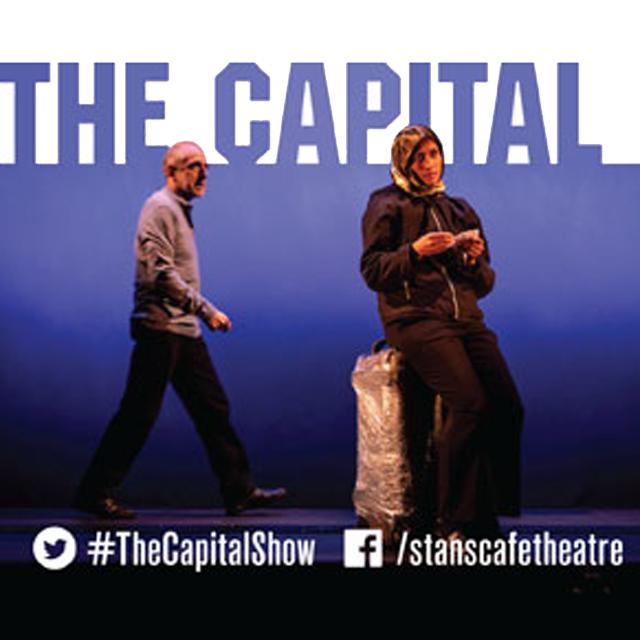 Enjoy Half Price Tickets for The Capital

We’re bringing The Capital to Didcot for you to experience for yourselves. We hope you come and if you do maybe you can help us out. You see we’ve been saying the show is ‘about’ inequality since back in the mists of time because that’s the show we planned and put all this care, love and obsession into making, but now it’s grown up and fully formed the show’s started to have its own ideas and seems to think that it is ultimately and more profoundly ‘about’ something else: the finite span of a human life. Maybe you can tell us who is right?

Enjoy half price tickets for The Capital when you quote CapitalDid at the online checkout or at our friendly box office.

We were seeking a new level of collaboration with Warwick Arts Centre and so asked them which departments were ‘the most exciting on the university campus?’ This led to a conversation about Economics where the Head of Department had an ambition to teach their entire undergraduate programme from artistic stimuli.

This struck a chord because back in 2009 we made The Just Price Of Flowers explaining the mechanics behind the previous year’s financial crisis using Brecht as our guiding star. We enjoyed making that show and it was an audience favourite so we were especially keen to meet this art loving economist.

Professor Abhinay Muthoo was very welcoming, he organised two days in which we met a succession of his senior researchers and received mini-presentations outlining the projects they were working on. We had a mind expanding time.

It turns out economists research into social networks and how to convince Zambian slum dwellers to use toilets that have been installed but are being ignored; they scrape data to see if racial cues influence choice in AirB&B rentals; they build and play ‘game theory’ and study on how state interventions prevent or inadvertently promote violence among citizens or influence internal migration; they advise how to balance subsidy with taxation to equalise access to food and fuel for millions of people; they attempt to quantify the happiness of populations through history and to understand how, in Denmark, a monopolistic supplier of beer became more profitable after its monopoly was broken. After all this we moved on to day two.

After day two we had to have a lie down. Everything we heard was interesting, many studies could have inspired shows, some studies were virtually shows already, but no one study demanded it became our show.

On reflection, from all the vast diversity of interests we had heard expressed, the closest we came to finding a theme emerging was a shared concern about ‘inequality’. Inequality was seen as fueling unhappiness, displacement and violence. Abhinay himself cited inequality as possibly humanity’s greatest challenge - we pondered, maybe inequality should be Stan’s Cafe’s next greatest challenge.

Years before I’d grown excited by the idea of a stage crossed by twin parallel moving walkways. Every few months I’d return to this idea and imagine all the theatrical fun that could be had with this setup. Imagining the fun was easy, but it was difficult to imagine what show would demand to be performed on these walkways and nowhere else.

There probably was a Eureka moment when I realised the walkways show and the inequality show were the same show, but I don’t recall where it was and it certainly wasn’t in the bath. The twin walkways set at different speeds would become a metaphor machine as soon as two people started walking on them side by side. The world isn’t a meritocracy if the walkway is set against you.

The setting for this show was easy to establish. We live in Birmingham, a big city where inequality can be seen on the streets every day. So yes, the show could be called Big City but the most famous book about inequality is surely Das Kapital so our show should also be The Capital.

The Just Price Of Flowers drew its drama from financial mechanisms such as Credit Default Swaps and Short Selling so initially we thought this new show could work the same way. I sat down to read the Marx. I also read about the Greek financial crisis and key economists and Joseph Stiglitz’s theories of inequality. It was all interesting but none of it felt helpful.

Financial inequality is entwined with inequalities of race, gender, age, education, opportunity and so on. Our show felt as if it should take on this broader definition of the term and fold in the lived experiences and observations of the team devising it.

By now Abhinay had moved on to a new post within the University and Birmingham Repertory Theatre stepped in to support the show and host its premiere. On 12 February, when the show finally reaches Warwick Arts Centre, it will be reunited with the economist friends who to all intents and purposes said “you could make a play about that”, it will be interesting to see if they recognise what it was they inspired.

Before then we’re bringing The Capital to Didcot for you to experience for yourselves. We hope you come and if you do maybe you can help us out. You see we’ve been saying the show is ‘about’ inequality since back in the mists of time because that’s the show we planned and put all this care, love and obsession into making, but now it’s grown up and fully formed the show’s started to have its own ideas and seems to think that it is ultimately and more profoundly ‘about’ something else: the finite span of a human life. Maybe you can tell us who is right