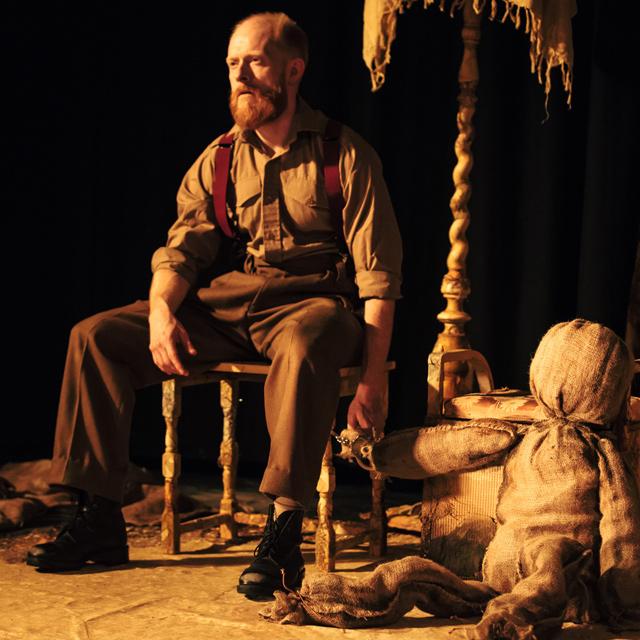 Following its critically acclaimed premiere at the Edinburgh Festival Fringe 2016, Scorched, the new play from Open Sky, will arrive at Cornerstone on June 15.

Inspired by the life of his grandfather, writer Lisle Turner presents the story of a World War II veteran whose self-tattooed body reminds him of his past as dementia erodes his present.

In 1991 Jack reigns from his armchair, a decorated veteran of Tobruk, former river warden, boxer, horse whisperer, boat builder and charmer, but his mind drags him back to 1941 when he chased a German prisoner of war for two days across the scorching sands of the Sahara desert.

75 years after the Siege of Tobruk, as soldiers continue to be sent to war in the desert, Open Sky considers the language, or lack of language, that veterans use to talk about war, the effects of dementia on memory and self-determination, and the relationship between masculinity and violence, love and loss.

Lisle Turner said, “My grandfather wouldn’t talk about the war and how it affected him for fifty years. Then when dementia struck in his late eighties shocking stories started to pour out. At the same time my school friends were being sent to fight in the Gulf. Those desert wars continue to this day. Society is quick to forget what war does to soldiers and their families. My grandfather’s own memories betrayed him in the end. I want him, the things he did and saw and sacrificed, to be remembered.”

For one Second World War veteran the launch of Operation Desert Storm is about to unleash a whirlwind of memories. In ever changing episodes we learn more of Jack’s childhood, his former glories, family and, central to everything, the burning hell of war in the desert.

This cleverly written script paints a vivid portrait of a man, while looking at wider issues of “manliness”, war and fading memory. It’s beautifully told using a mix of physical theatre, projection and sound, all bound up in a set where sand is everywhere, sweeping from the past to the present. A superb performance allows Jack to move elegantly between his hard and feisty youth and his wilderness years.

"By turns shifting, gritty, soft and searing, it is one of the most complete theatrical experiences at this year’s Fringe.”  Edinburgh Guide