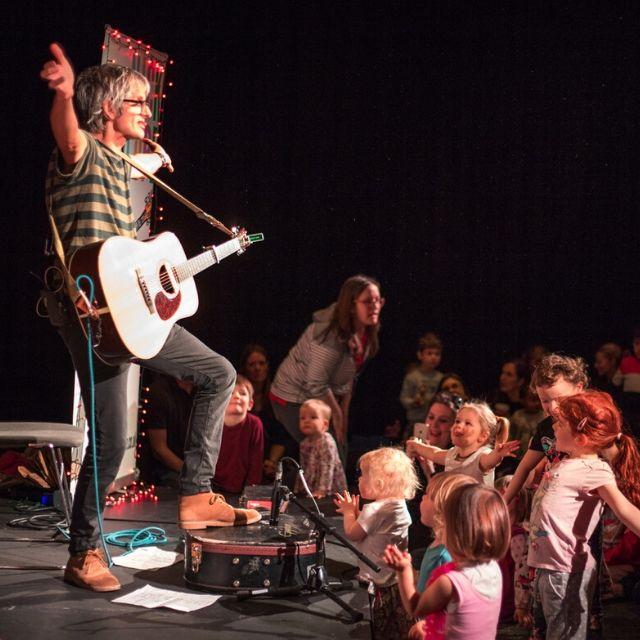 There's no need to worry about hungry children when you visit Cornerstone. Pre-book them a yummy lunch box!

Children can enjoy before or after the show but we ask you kindly not eat these lunches during our show.

Please pre-book your lunch boxes when purchasing your tickets and collect on the day from Nourish (our in-house cafe).

Nick will be appearing in his own series for the BBC’s CBeebies channel, a magical, mixed media, musical adventure called Nick Cope’s Popcast. Nick will be joined by Norman his whippet, and his gorgeous Grandson and they will be will be popping on to your screens in the spring.

For close to 10 years Nick has been writing, recording and performing music for families and has established a fanatical army of little people and their parents from all over the world. His six albums of original songs have become a must have for thousands and thousands of young families. His latest Album “Have you heard about Hugh?” features the incredible Folk musician Jackie Oates, Nick has also worked with members of Stornoway, Andy Bell (RIDE Oasis) and producer Sam Williams (Supergrass, Go Team ) to name a few.  Nick performs sell out shows up and down the country at theatres and art & music festivals.

“Funny, profound, educational, our children have talked about everything from gravity to grieving thanks to Nick Cope’s songs. Our family’s favourite singer /songwriter” Lucy Porter 2016

Nick Cope’s family performances are legendary! He has a fanatical army of little and not-so–little fans from all over the world, if you haven’t heard his songs or seen his shows before come and find out what you’re missing.

“Funny, profound, educational, our children have talked about everything from gravity to grieving thanks to Nick Cope’s songs. Our family’s favourite singer /songwriter” - Lucy Porter

“Even the shyest of kids will warm to his unpretentious style.” - Fest Magazine

“Nick puts the audience first, and deserves a much, much bigger one. If that audience could be you, go and see him.” - Broadway Baby