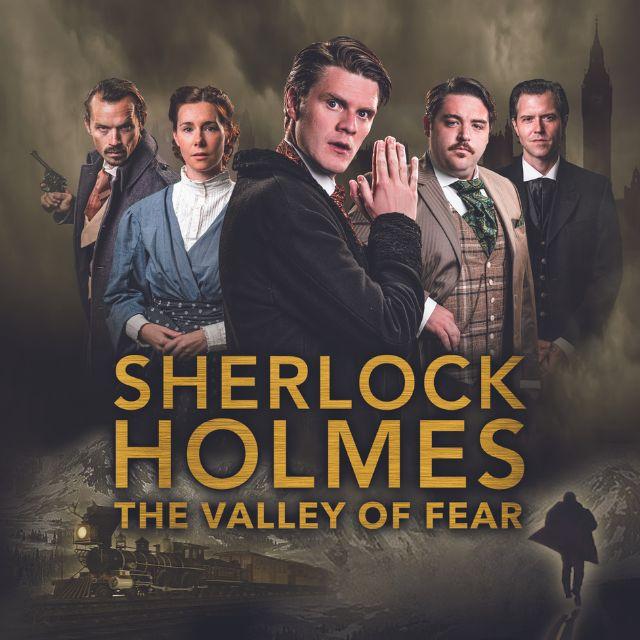 Exclusive offer for schools: For bookings of 25 or more, online access to an HD recording of The Valley Of Fear is included in the cost of your booking.

Sherlock Holmes - The Valley Of Fear

Following the huge success of Blackeyed Theatre’s 2018 production of The Sign Of Four, the great detective is back in another gripping tale, The Valley Of Fear. Crammed full of adventure, mystery and of course one or two rather brilliant deductions, Sir Arthur Conan Doyle’s thrilling final Sherlock Holmes novel is brought to life in this spectacular new stage adaptation.

A mysterious, coded message is received, a warning of imminent danger, drawing Sherlock Holmes and the faithful Dr Watson into a tale of intrigue and murder stretching from 221B Baker Street to an ancient moated manor house to the bleak Pennsylvanian Vermissa Valley. Faced with a trail of bewildering clues, Holmes begins to unearth a darker, wider web of corruption, a secret society and the sinister work of one Professor Moriarty.

“ An elegant last adventure... A sharply told adaptation... Barton and Derrington build chemistry, having played the duo before, and infuse their pairing with intensity” The Guardian

“ The Valley of Fear is a fine addition to the company’s canon. It’s actually two tales in one – the great detective’s untangling of a murder mystery and the backstory behind the crime – and Lane weaves them brilliantly together in a way that transforms Conan Doyle’s novel into something truly theatrical. The pacing is beautifully judged and the performances both entertaining and illuminating...
Classy, evocative and full of intrigue – everything you could want from a Sherlock Holmes adaptation ” - Stage Reviews