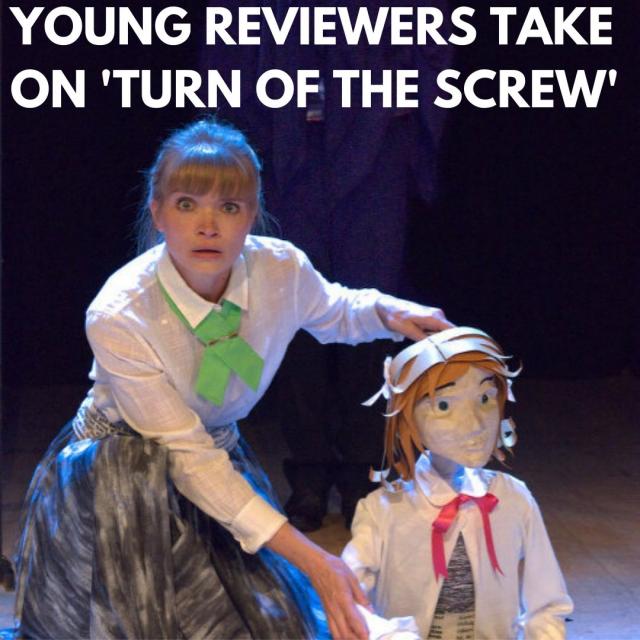 To give you an insight into one of our wonderful classes 'Young Reviewers', which is for anyone school years 9 to 13 who wants to learn how to form a critical opinion on the performing arts, we are publishing their reviews of the recent show 'Turn Of The Screw' produced by Box Tale Soup.

You can sign your child up to this class by following the link here: Young Reviewers

Please note these opinions are all their own and do not reflect Cornerstone Arts Centre's opinions.

Box Tale Soup's wonderfully eerie production of 'the Turn of the Screw', directed by Adam Lenson and performed by Antonia Byrnes and Noel Christophers, is just the thing to get you into the spooky spirit. Over the two or so hours of their performance the two actors are able to animate the six characters of the classic Victorian ghost story with uncanny skill.

To create the majority of the living characters they use a number of puppets. These are little more than clothes on a cardboard frame, and cardboard tubes for arms, yet they are skilfully worked, bringing them to life and imparting a good deal of unease on the audience. They float across the stage like silken spectres, marvellously animated by Christophers, primarily, and by Byrne secondarily, when Christophers needs to be elsewhere. The score is also well composed, enhancing the atmosphere without distracting from it, always able to set one on edge. It is well paced, building slowly and inevitably to the horrific conclusion. The writing feels a faithful translation from book to page, capturing the archaic style of the piece, leaning more on the Governess’s madness, and bringing new subtleties to the other, well-worn characters. Byrnes is also a gem, bringing a glorious physicality to the governess.

I left the theatre thoroughly unnerved, but would not recommend this to one in search of easy jump scares. Like the best horror, it relies on the audiences constant questioning of events on stage, and never stoops to fill in the gaps for you. It is unlikely to shock, yes, but may unsettle in a longer, slower, and ultimately more satisfying way.

Of course it isn't without faults. It makes little effective use of the framing device, merely throwing it in for tradition’s sake, and the appearances of the previous governess are, at times, difficult to watch, due to the way they chose to represent the ghosts. If you are willing to overlook these, however, you are in for a solid take on a classic ghost story, which I would recommend going to see if you think you would enjoy it.

Why would one see a dramatization of a ghost story?  To get into the Halloween spirit? To be entertained or scared, or to escape to a haunted mansion for an hour?  Box Tail Soup presents the classic Turn of the Screw, a Victorian masterpiece that explores the psychological fears of an era. I was disappointed in the production however loyal to the book by Henry James. The terror that was meant to be communicated never made me feel uneasy. I was never worried or concerned by the characters, even though they wanted me to.

The two actors, Antonia Christophers and Noel Byrne, portrayed the entire cast with puppets apart from the Governess. I disliked this as the mystery that comes with puppets was broken as the puppet master also played characters himself. This was original and imaginative but ruined the magic that the puppets were alive because you could see them go to sleep and be left by the puppeteer.

In conclusion, even though the play had its creativity, it disappointed me in execution.